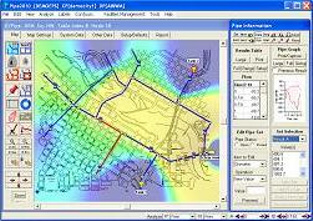 The developers of the Pipe2016 program are well trained researchers in the field of network modeling and have published scores of research papers in top technical journals of the world. More importantly, the users are entitled the FREE technical support they receive directly from these highly knowledgeable developers of complex hydraulic engines associated with these programs. This is certainly most unique in this field considering the large loyal user base that Pipe2016 enjoys and the popularity of the program.

The complete Pipe2016 package that allows full-fledged hydraulic analysis of fluid distribution systems is available on the web page. This program allows you to explore numerous other useful feature of the program and all associated modules including Surge2000, Gas2000 and Steam2000. Several Audio Visual presentations that let you explore the features of the program are available at the web site www.kypipe.com